I have several botanical art pieces in the show. In addition, digital prints of two of my botanical paintings are for sale at a really wonderful shop in Front Royal, called Gathered. 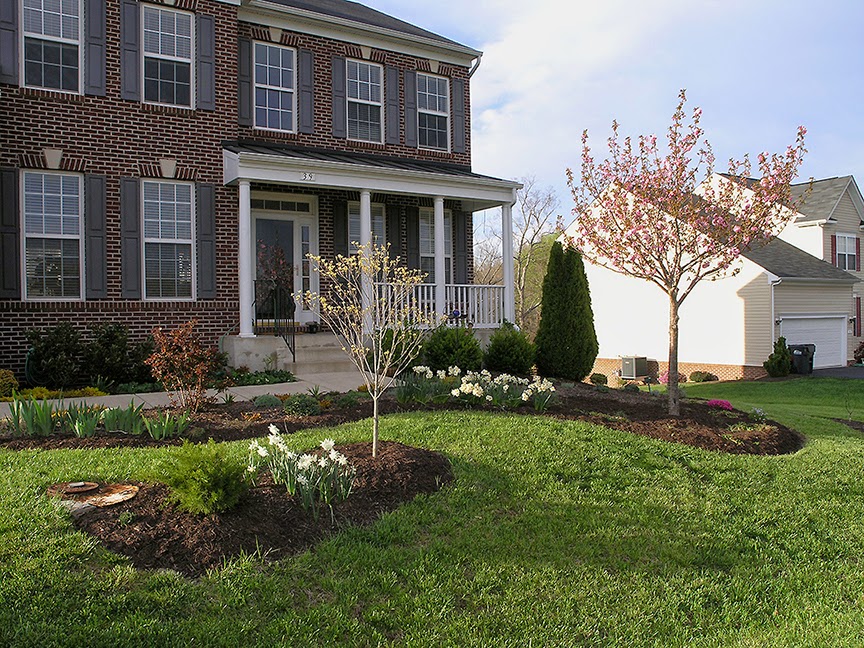 Spring is here and my front yard is looking better and better. The new bed of Thalia narcissus in front echoes the whites of the poet's narcissus farther back and their fragrance spruces up the entire front yard. Several new shrubs and perennials are on the porch waiting to be planted. It's hard for me to keep up with the yard work: digging new beds, re-edging the older ones and putting down new mulch. But the work is so rewarding when the garden looks resplendent after a good rain!
Posted by Elemaza at 1:24 PM 1 comment:

Email ThisBlogThis!Share to TwitterShare to FacebookShare to Pinterest
Labels: front yard in spring, new plantings, Spring 2015 Art at the Mill


Our bird photographer companions on board the Alligator had told us about the St. Marks River Wildlife Refuge nearby, and that a festival was taking place there the next day. The following morning we left the lodge around ten and by the time we arrived at the festival site, many cars were parked alongside the road, we walked about a quarter mile to the site.

I had expected the festival to be of a commercial nature, with lots of vendors hawking arts, crafts, and gizmos, and was pleasantly surprised that most of the booths were informational, with only a few commercial ones. I wish I'd taken photos of some of the exhibits, particularly a wood carver's stand which had some wonderfully whimsical hand-made toys on display, and the elderly gentleman who had created the toys sharpened Herb's pocket knife so expertly for free! But alas, I had left my camera in the car. There was a fisherman teaching children how to cast, an Audubon Society booth, and the local native plant society, whose congenial folks told me about the Florida Wildlife Corridor that state conservationists have been working to establish.

After an hour or so at the festival site we drove out to see the historic St. Marks Lighthouse. Approaching the coast, hardwood forest and stands of slash and long leaf pine give way to expanses of salt marshes crisscrossed with streams. It was getting warmer by the minute, and we quickly shed our jackets. I wished we'd gotten here earlier or later, as the high noon light makes things look too flat and contrasty, but the views are spectacular in any case.

A group of Civil War reennactors had a camp set up at the base of the lighthouse. The lighthouse played a role in the Battle of  Natural Bridge in 1865, reputedly the last southern victory in the war.

Built in 1830, the St. Marks Lighthouse has not been occupied since 1960, when the beacon became automated. In 2000 the Coast Guard stabilized the structure but transfer to the U.S. Fish & Wildlife Service did not take place until 2013. The old fresnel lens was taken down for hand-cleaning and the old refurbished lantern is now on display inside, along with some artifacts.


The stairs going up to the tower were off-limits--too bad, it would have been wonderful to see the view from the top. One of the reennactors, dressed as a captain, posed for us tourists at the entrance of the tower stairs. The lighthouse keeper's quarters beyond consisted of two rooms, containing a few exhibits. The artifacts on display bespoke of the isolated life the keepers of the lighthouse and their families must have led, even into recent times.

Outdoors again, we drove out towards one of the nearby salt ponds overlooking the lighthouse, where I could work on a small watercolor sketch. The afternoon sun was merciless, and there was no shade there to protect us from it, so we stayed in our car with all the windows open to keep the heat at bay, and shed even more layers of clothing while I painted as fast as I could.

After my sketch was finished we drove back through the refuge towards Wakulla Springs Lodge for our last night there. After dinner we went out in the gardens for a last look--the starry sky dazzled, and in the night's frosty air it it didn't take much imagination, one could almost see the Creature from the Black Lagoon creeping along the foggy shore... 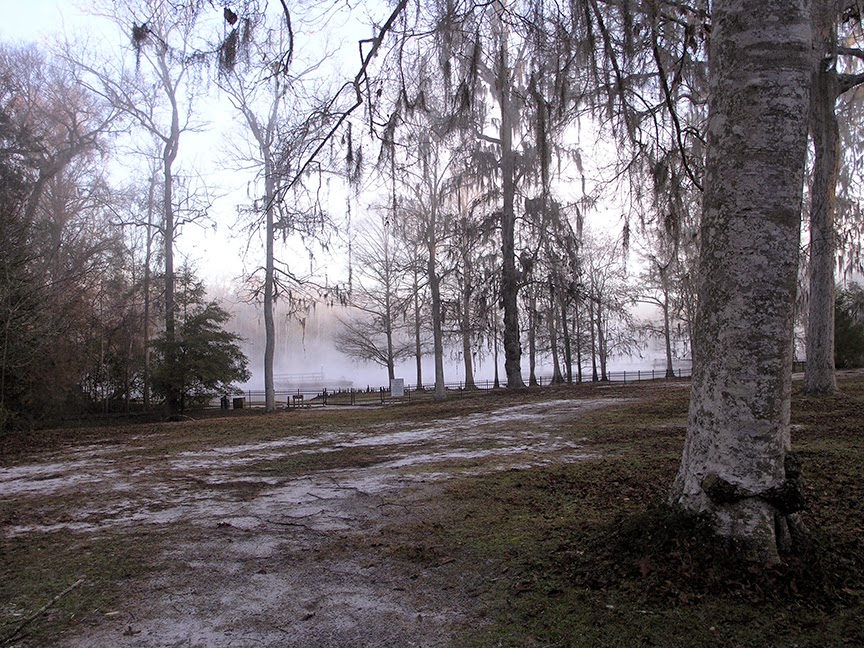 This last photo was taken the following morning, as the mist was lifting, just before our departure. I hope we will have a chance to visit beautiful Wakulla Springs another time soon.

For more photos of the St. Marks area see my Flickr album here.


In the afternoon we took a walk in the Wakulla Springs Forest. The trail begins just on the other side of the guest parking lot. A boardwalk takes one around a small sinkhole before crossing the road, then enters the old-growth forest. Edward Ball purchased the property to preserve the forest around Wakulla Springs back in the 1930's. The irony of a financier who had made his money on paper mills which dictated the cutting of thousands of trees for pulp trying to preserve this particular forest did not escape us, yet we are all fortunate to enjoy his legacy.

The trail goes through about six miles of forest to reach the boundary of the state park, but it's not a loop, so however far one goes, one must walk back the same distance. We knew we didn't have the stamina to undertake the entire twelve-mile round trip, so the question was to gauge how far we could get before the prospect of our feet giving out and/or nightfall made returning imperative.

Fortunately the terrain was flat and the trail well-maintained. Wooden boardwalks took us over swampy areas where cypress knees abounded as we approached the bridge that crosses over Sally Ward Spring creek, which marks the first mile.

On the other side of the bridge, the trail becomes more rugged, with tree roots breaking up the level ground. The immense size of the canopy overhead can best be appreciated at this time of the year (I was glad there were no insects to deal with). Huge southern magnolias (Magnolia grandiflora) grew amid oak, sweet gum (tupelo), bald cypress, pine, red maple and hickory trees of enormous size. To reach such size some of these trees had be about two hundred years old or more. Young cabbage palms grew in some of the seeps.

We went deeper into the forest, passed the second mile marker and pushed on hoping to make it to the next bridge, reported to be around mile three. The vegetation on the forest floor varied depending on the tree canopy, from very open in drier ground to dense in other areas. We came across squaw-root (Conopholis americana) and other fungi here and there.

We crossed a fire road with fences along both sides, and still no bridge in sight. We continued for another half mile or so as the afternoon waned, and still hadn't found the next bridge. It made sense to start back at this point, when our feet were beginning to feel stressed.

The walk back seemed to take less time. It's telling to me, that somehow the return trip always seems shorter than the trip going out. Is it because the return is familiar, where the initial exploration takes longer because one is looking around, perhaps subconsciously noticing any landmarks and other useful information that might be needed later on, or simply taking the time to enjoy new sights?


As we were returning we encountered a family group going out on the trail--it seemed a bit late to be starting on this trail but perhaps they weren't planning to go very far. Our feet were definitely feeling the five-mile hike by the time we reached the lodge. We didn't see any birds of note and the only animal we encountered on our hike was this sassy squirrel--we probably would have done better if we'd gone earlier in the morning or later, closer to dusk, when animals are more active.

I had just enough time to rest a bit in our room before going back to the previous afternoon's site to finish my watercolor. I'm afraid I rushed the second stage of the painting and it didn't come out as well as I'd hoped--the reflections in the water were too strong in color, particularly the Gamboge yellow. I went back and fixed some things the next morning, lifting the excess of color from the water. I don't find this painting as satisfying as the one I did on the Chazz, but hopefully it communicates some of the haunting atmosphere of Wakulla Springs. I'd love to return sometime in the spring to see the cypresses with new foliage, and bathe in the springs.