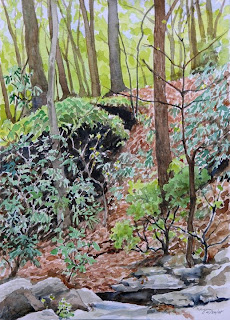 Yesterday my friend Linda and I went on one of our wildflower walks/painting/photo excursions. We'd chosen Oregon Ridge Park to the north of Baltimore because one of my plant guidebooks lists several rare plants that grow here, and neither of us had ever explored this park. The day was beautiful, a bit hot for late April when we started our hike. The terrain rises from the visitor center to a sizable hill where a century ago there used to be a ski area, and the main trail is an old logging road.

The unusual plants are found in an area called Ivy Hill, where the land drops off steeply towards a stream. It is presumed that these rare specimens were planted here long ago and have naturalized, since woods with mixed deciduous and evergreens such as hemlock and pine are rare in our area, specially growing with tree-sized rhododendrons more typical of the southern Appalachian mountains. 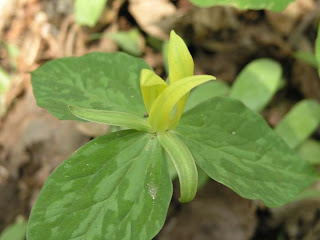 We found a clump of Yellow Trillium blooming near the stream, where we had our picnic lunch, but we were unable to find any of the Oconee bells (Shortia genus), so we finally settled by a pond with some enormous rock formations perfect for sketching. This painting of the rocks covered with ferns and the rhododendrons is the result of our pleasant afternoon, and I'm selling it for $100 as is, (not matted or framed); shipping costs to be paid by the buyer. If you are interested in buying, please contact Elena.

On the hike back we found some dog-tooth violets, a species which I'd not seen before, along with blue birdsfoot violets. White and yellow violets were also to be found, the white ones in profusion.
Posted by Elemaza at 1:05 PM 1 comment: 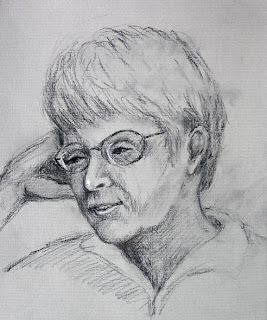 I've been studying portraiture for about three years now at the Columbia Arts Center. This is a quick sketch of a friend I visited recently. It was hard to get her to pose, but I believe my sketch in delicate, nervous lines, captures something of her skittish, introspective personality. Underneath, there is a strong-will, and one very resilient woman. She remarked that "her looks were changing," which I took to mean that she thought I'd made her look too old. I sympathize: last year a friend sketched me while I painted, and I was surprised to see myself as a little old lady with reading glasses. It's difficult to accept aging and do so gracefully, being aware that I too have a double chin (mine is much more pronounced) and my flesh is starting to hang down a bit in incipient jowls. Yet as an artist, I refuse to compromise too much, and feel compelled to draw what I see.
Posted by Elemaza at 8:41 PM No comments:

Cherry Blossoms and the Moon 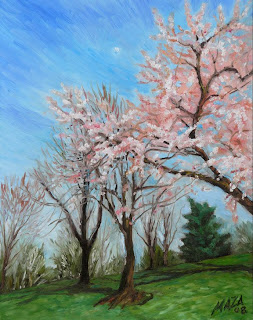 It was only five days ago that the cherry blossoms in our neighborhood were in their glory. Herb and I went out for a walk that evening and lo, the waxing moon was rising as the sun was setting. The flowering cherries in conjunction with the rising moon seemed a special omen, so I took photos for a painting. Today the flowers are fading and the emerging leaves begin to overtake them... Sakura: such brief and evanescent beauty!

The painting is selling for $100, shipping and handling are extra. Please E-mail Elena if you are interested in buying.
Posted by Elemaza at 7:42 PM 1 comment: 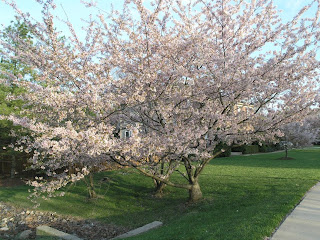 Finally, the weather is glorious and our cherry trees are in full blossom! In this photo you can see the lovely cherry trees at the entrance to my neighborhood. Today it's really warm. I'd better get started on my painting of the cherry blossoms, so I can post it tomorrow or the day after.
Posted by Elemaza at 5:49 PM 1 comment: 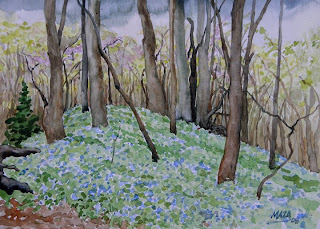 My dear friends Patrise and Linda live in southern Maryland, very close to Chapman Forest, a large estate on the Potomac riverfront established in colonial times. The old estate has been preserved by a local group and contains many acres of old-growth forest, among which are several large upland patches of Virginia Bluebells, an unusual occurrence. Most large bluebell patches are found along riverbanks where the spring floods help the plants propagate in sandy loam. I wonder just how many years it takes for bluebells to form a patch this big... fifty, eighty or a hundred years undisturbed?

The weather looked pretty chancy for the weekend, but I decided to risk it, since the blooming season for these beautiful flowers is so short, and it had been a couple of years since I'd been down there in the spring. I drove through several showers on my way south from Columbia, and we encountered one more downpour as we were getting underway for our hike, but we got lucky and it didn't rain during the afternoon. We saw other wildflowers during our hike: Dutchman's breeches, tiny white violets, smooth yellow violets, and Jack-in-the-pulpit.

The storm clouds make a dramatic backdrop for this hill covered with bluebells, and the purple-pink color of the redbud flowers is the perfect complement to the tender greens of the emerging foliage. I'm selling it for $100, shipping and handling is additional. If you are interested in buying please drop me an E-mail.
Posted by Elemaza at 7:47 PM No comments: 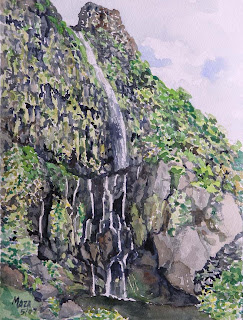 One of the loveliest things about Flores is the number of waterfalls and pools that can be found on the island, particularly on the west coast where the central volcanic mass drops precipitously towards the ocean. Several very deep crater lakes store the plentiful rainfall, which drains slowly as a series of long, thin waterfalls dropping down thousands of feet along the western cliffs, and creating scenic pools like the Poca do Bacalhau (which translates to Cod's Pool).

This watercolor was painted on location when I was there last year as artist in residence. The walk toward the pool was through a small cow pasture, and I had to climb over a fence to get to the end of the trail. Yellow flowers bloomed along the banks of the stream, and there was an abandoned stone house for some romantic ruins. The dried stalks of flowers identified blooming ginger plants growing on the steep rocks above the small cascades dripping into the pool. It got very chilly sitting on a rock while the breeze wafted spray from the falls over me, so it was all I could do to stay and finish the piece, but I stuck to it.

I think the painting conveys an accurate sense of the place with its dramatic waterfall and the dark volcanic cliffs. I'm selling it for $175, because Flores is such an unusual location--so difficult and expensive to get to-- and the hardships I endured to paint it. Shipping is additional, and there is a $5.00 handling charge. If you are interested in buying, please send an E-mail.
Posted by Elemaza at 10:16 AM No comments: 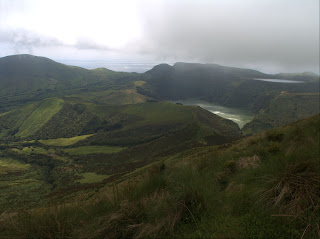 The topography of Flores with Lagoa Funda (lower lake) and Lagoa Rasa (high, on the right). The road runs between the two lagoas, the Atlantic Ocean can be seen beyond as a patch of blue below the clouds. 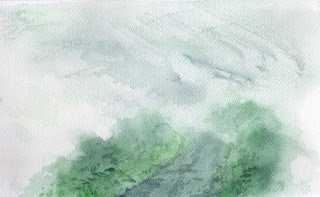 This small watercolor was painted last year in Flores from memory after an incredibly scary drive in a raging storm. I was supposed to be flying out of Santa Cruz on my return trip to the U.S. that day, and despite the storm, a call to the airline informed me they were flying, so I had to get to the airport. It seemed like an exercise in futility, but there was no choice. The flights direct to Boston were scheduled only twice a week.

My house-mate Marylee was so brave to drive me from Lajes over the narrow, winding roads in visibility of perhaps 5 feet. Torrents of water ran down the steep grades, making the stories we'd heard about small children being swept down seem quite plausible. The cows in the pastures lined up side by side, instinctively closing ranks against the wind and lashing rain.

My painting shows what we saw of the road that runs between two of the lagoas (small crater lakes) in the central massif of the island. Beyond the hydrangea bushes bordering the road, white froth was the only sign of the location of a very steep drop into Lagoa Funda, while on the other side of the hydrangeas the shallower Lagoa Rasa was erased by the churning rain. There weren't any other cars in sight (only dire necessity would force anyone to drive in a storm like this), so at least we didn't have to worry about a collision.

After waiting at the airport for a couple of hours, they finally told us the plane could not take off from Sao Miguel in the storm, and would not be coming to Flores. So we had to do it all over again driving back to Lajes, although by this time the wind and rain had slackened.

I ended up having to fly the next day and spend two nights in Lisbon to get back to the good ol' USA. This unexpected detour led me to explore a lovely city I would otherwise not have seen.

The painting is priced at $100, shipping cost is additional, and there is a $5.00 handling charge. I hope you enjoyed the story; thanks for looking.