Extreme Painting in the First Snow 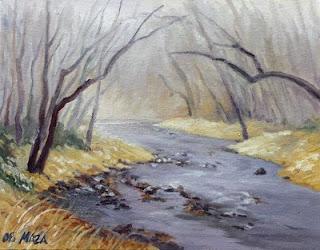 I'd signed up to go painting on Friday with Lee Boynton and a few students. We were to meet at Jerusalem Mill, a historic village from colonial times that is part of Gunpowder Falls State Park a bit north of Baltimore. In addition to the restored buildings and the mill there is a very pretty covered bridge that Lee had painted a few weeks earlier and had really appealed to me.

The weather wasn't very promising: the temperature hovered just above freezing and they were predicting snow flurries, but we agreed to meet as planned. The sun was shining when I left the house but by the time I arrived at our site the sky was getting that leaden look. The others were already setting up their easels by the old general store. I was glad I'd brought an extra polartec jacket to wear underneath my lighter nylon shell, but regretted that all I'd brought was my baseball cap.

Fortunately, one of the other ladies had an extra winter hat she loaned me--I wouldn't have lasted long without it. I had just set up my gear, loaded my palette, and was ready to roll, when here came the flurries: thick, wet flakes. The background trees became faint shadows, whited out by the snow. The snow began to stick, even to our palettes, the ice crystals mixing with the oil paint made one lumpy mess. Lee said to use more medium to keep the paint fluid, but after a while it was useless. This was really more like an ordeal: extreme painting!

Two of the ladies retreated to the porch of the store, and eventually we all ended up there (by that time my gloved hands were frozen stiff). We decided it would be a good idea to take our lunch break inside the store. Even unheated, the inside was much warmer by comparison. The flurries had stopped, and a feeble sun emerged from behind the clouds. After lunch we walked a short distance over to the covered bridge to scout our the location. Two of the ladies didn't want to chance the slippery footing at the banks of the stream; they opted to stay in the village for their afternoon painting, while the rest thought the stream, rather than the bridge, was the better view.

There was a road crew cutting down tree branches along that stretch, taking up more than half of the two-lane road, so rather than driving, we decided to walk. Along the way, my new hand-made palette somehow slipped out of its case and fell on the ground face down--isn't that the way buttered toast always lands? That did it--cleaning the palette would take time, if I didn't drive I might not make it there at all. I walked back to the car, put my stuff in, and drove over to the bridge.

The others were painting away by the time I was set up, and as I was laying in the sky, Lee exclaims, "Look, here comes the snow again!" Again our background disappeared in a fog, but the scene was beautiful with its muted colors. Again we struggled with the snow crystals sticking to our palettes, making it all but impossible to see the colors we were mixing. I managed to record the scene with incredible speed while the others, working at a smaller size, did a second painting. We packed up and went back to the porch of the now-closed store to end our day with a critique. I was surprised at how well this second painting turned out.

Lee showed us some gorgeous winter scenes painted by Emile Gruppe, a New England artist working in the first half of the twentieth century, and we talked about his paintings. He must have been one hearty artist to have endured the outdoors painting Vermont winters! As we were able to observe first-hand, at low temperatures oil paint becomes very viscous and hard to work with.

It took hours and lots of hot tea to thaw out once I got back home. If I'm going to do this again, I'll need to invest in warmer clothing. Despite the cold, I enjoyed our extreme painting experience.
Posted by Elemaza at 9:48 AM No comments:

Rainy Day in the Studio 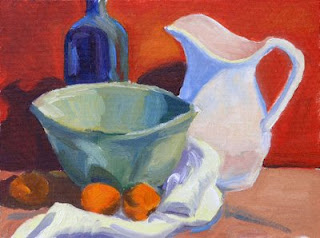 It was very rainy the day before our last class, so our teacher E-mailed the evening before that we would meet at Maryand Hall and work on a still life in the studio rather than go out to paint in the wet outdoors. I have to confess that still life painting has never thrilled me much, so I wasn't very enthused with the idea. But I recognize that there is a great deal to be learned from the study of still life, so I was curious to see Lee's demo and try a painting with the new insights about color I've gained.

I was a bit late getting there due to the slow traffic, and the class was starting so I had no time to set up before Lee began his demo. Verbalizing his thought process was wonderful, as usual: how and why he "edited" to select his particular composition, how he put in his main blocks of color and only after these were down and the white surface mostly covered did he begin to refine the color and shapes.

Since we were doing longer critiques for this last class and I had to lay out my palette, I didn't have as much time to actually paint as I would have liked. I struggled finding the right "val-hues," particularly for the green bowl and the blue bottle, and my shapes are not very refined, but it is amazing to see the theories translate into this painting. Strange how just the right val-hues can convey the shapes even at this primitive stage in the painting!
Posted by Elemaza at 11:26 AM No comments:

A Symphony of Color 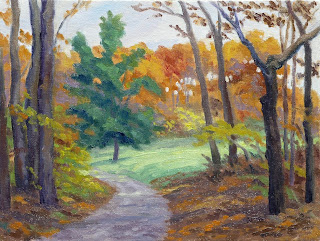 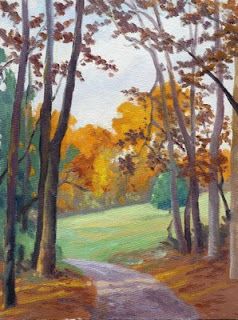 Driving to class in the morning, it seemed the foliage was even more vivid than last weekend: stands of trees looking like molten bronze in the morning haze, small bushes in magenta and purple-reds creating a veritable symphony of harmonies in color.

We set up our easels in the woods just like the week before, but the light was again very different from last week's sunny, crisp day. Today, fingers of sunlight played upon the road from time to time as the sun broke through the clouds moving overhead, but it was delightfully warm. The carpet of leaves was finer in color than any Persian rug I've ever seen.

I was able to stay all day and do another painting in the afternoon, painting until the last rays of the sun were disappearing behind the trees. Gloom was descending upon the woods by the time I got everything packed, though it was only five o'clock. I'm always a bit sad to see the days become shorter, though autumn brings the year's end in a glorious crescendo of color.
Posted by Elemaza at 12:31 PM No comments: 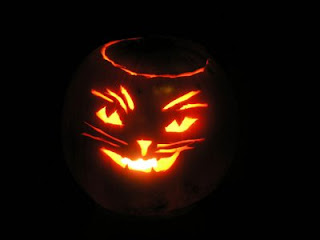 This year's jack o'lantern: The Cat's Eyes carved by Herb 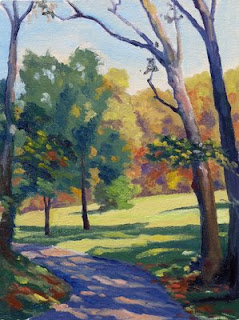 It's been a tough week, my friends: on Wednesday evening I rear-ended an SUV on my way home after a particularly tiring 12-hour day. Fortunately, no one was injured, but as a result of the accident, my beloved 10-year-old Saab, "Spice Girl" is now a piece of junk.

I couldn't have made it to class if it hadn't been for the loan of Herb's car, but I was extremely glad to be there and put the whole week behind me. The day was beautiful and we had a different view of Belvoir to paint, with strong shadows in the foreground and a brightly-lit background.

My painting turned out fairly well--finally got to use some of the cadmium reds and oranges for the foliage colors and the light and shadows are convincing. I was amazed to see how quickly it came together following Lee's method. Another change in approach that has been enormously helpful is to sketch with straight lines only--this makes for a much stronger composition from the beginning.

In the late afternoon, just before dark, I sketched out this year's traditional jack o'lantern on the pumpkin and Herb carved it in record time, just before the first trick-or-treaters rang our doorbell. In all, it was a wonderful, warm Halloween with the fall foliage at its peak.
Posted by Elemaza at 8:22 AM No comments: