For the past week we have been visiting friends on Amelia Island while enjoying northern Florida's lovely winter weather. During the week Herb and I had a chance to explore the surrounding areas. On our first excursion we took the scenic route along the length of Amelia island, over bridges connecting the barrier islands, down to Jacksonville to check out the Jacksonville Arboretum. The Arboretum has hiking trails through several distinct ecosystems displaying a variety of northern Florida plant communities. Among them is an endangered habitat known as rosemary scrub.

The day was heavily overcast (in fact I thought we might get rained on at some point), but a few drops was all we got. I had never seen a Florida rosemary plant, a relative of our culinary rosemary, which grows on poor, sandy soil, along with deer moss, a low-growing pale grey-green globe.

Herb and I had taken camping stools with us so I could sit along the trail to sketch and he could keep me company while I painted. It took about forty-five minutes to do this small watercolor sketch; the soft grey-greens were hard to render accurately.

After a very late lunch we headed downtown to check out the Cummer Museum of Art and Gardens. We got there at a quarter to five, but as luck would have it, that was their weekly free-admission day as well as when they stay open until 9:00 PM. We saw a wonderful exhibit of Impressionist and Post-Impressionist paintings from the High Museum of Art collection. Unfortunately, we weren't able to see the gardens, which closed at five. Instead, I watched a short video about their historic garden on the St. John River waterfront. Afterwards I asked a young docent if an artist would be allowed to paint in the garden. Carlos agreed to Email me after he checked if that was all right. Next day he Emailed that it would be fine to paint there, so we decided to return in a few days.


For more photos of the Jacksonville Arboretum, check out my album on Flickr here.
Posted by Elemaza at 3:47 PM No comments: 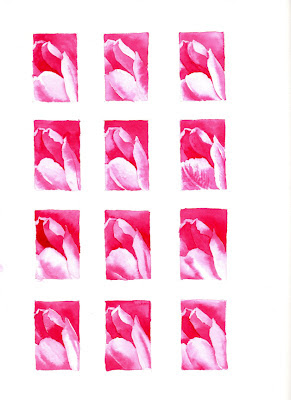 This is another one of my class exercises: to do twelve tiny watercolor paintings of the same view of a flower using only one color, to practice shading. The idea is to practice giving a sense of the three-dimensional shape of the flower using variations in the amount of pigment in the wash. I learned several new techniques for moving small amounts of pigment over wet areas with greater control.

First we sketched the flowers in class (in this case a tulip) and traced it on tracing paper, to transfer it onto the watercolor paper. We did a value study on the tracing paper sketch to decide which areas should be dark, which parts light, and where to put the mid-tones to create the illusion of three dimensions. Using this sketch as a guide, we worked one tiny painting, then went on to the next, and so forth.

Repetition being the key to mastery, this was a very good exercise. The results are pleasing, and the red-pink tones most suitable for a Valentine's Day emblem.
Posted by Elemaza at 9:14 AM 2 comments: